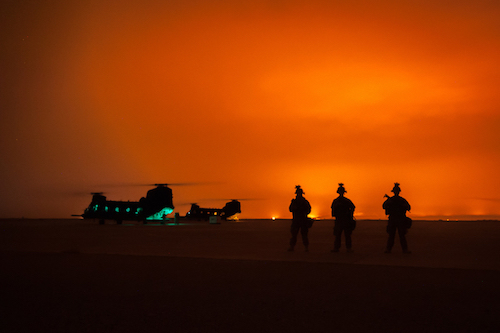 Exploding car bombs and ill-advised U.S. airstrikes have demolished the streets of what was once the proud city of Mosul, ISIS’s last major stronghold in Iraq. What remains is a war zone and one that ISIS cannot claim ownership over for much longer. As the American-backed coalition of Iraqi and Kurdish forces inch ever closer to its goal of recapturing the city, the Islamic State’s worldwide ambitions appear headed toward an impasse. The integrity of its Northern Iraqi caliphate is waning as it lies besieged amid the narrow alleyways and IED-strewn choke points of western Mosul. Its forces have employed increasingly destructive defense tactics that threaten both the anti-ISIS coalition and the city’s own residents through its clawing and foot-dragging “scorch-the-earth” exit. Losing Mosul spells strategic and symbolic doom for the caliphate’s goal of uniting the world under extremist Muslim rule. Fitttingly, ISIS’s metaphorical sun dims exactly where the group rose to prominence two years ago: in the shadow of Mosul’s Great Mosque of Al-Nuri.
Previously known for its historical significance and as a center of learning, Mosul became the heart of the Islamic State’s spread across the Middle East when the extremist group defeated Iraqi Army ground forces in 2014 and took possession of the city. At the Great Mosque of Al-Nuri in the center of Mosul, ISIS leader Abu Bakr al-Baghdadi proclaimed ISIS to be a global caliphate and installed himself as caliph. This has been subsequently followed by over two years of rule under ISIS’s extremist interpretation of sharia law. It was at this point that ISIS became a credible threat and one that fellow terrorist organizations like Boko Haram began allying themselves with. The city has served as a base for their operations, in conjunction with the caliphate’s Syrian headquarters in Raqqa, from which ISIS controls its territories in the two countries. The looting of a central bank for $425 million dollars and profit from Mosul’s lucrative oil fields have helped to fund the Islamic State’s weapons purchases and recruitment of new members. When the Iraqi army began coordinating with Kurdish forces in 2016 to converge on Mosul, it took over 3 months for the coalition to recapture the eastern side of the city. The Western Mosuli campaign finally appears to be in its final stages after seven months of heavy combat, with coalition forces now pushing into the last occupied districts. Iraqi Lt Gen Othman al-Ghanim recently predicted that the coalition could completely overtake the city in a matter of days.

Despite the recent positive developments, ISIS saw its destructive agenda completed and found a surprising ally through the questionable actions of the U.S. military. On March 17, a U.S. airstrike allegedly decimated buildings in hopes of helping coalition forces oust ISIS from its cover within the city. Over 150 civilians were killed in a single strike, making it one of the most fatal in U.S. history in terms of civilian casualties. Such casualties caused by U.S. intervention in the Middle East have shown time and time again to breed further extremism, feeding directly into ISIS’s anti-Western rhetoric and call to arms. There were never official designations over what caused the building containing these civilians to collapse, but U.S. military forensic units have strong conflicts of interests in investigating their own actions. Some within the U.S. defense sphere blame ISIS for blowing up the building and herding civilians inside in order to frame American forces. Indeed, ISIS has trapped civilians inside buildings to deter or incriminate American air support since then, but the anti-ISIS coalition is now wise to the ploy. Beyond the threat of U.S. bombings, the lives of common citizens are further endangered by ISIS’s guerilla tactics like the use of humans shields and the holding of civilian hostages. Aid to the city can scarcely get in without the threat of appropriation by ISIS. Additionally, the acceptance of Mosuli refugees runs the risk of harboring fleeing militants in disguise.

The offensive has been a tactical nightmare for the allied coalition. ISIS snipers, sarin gas, incessant car bombs and an intensified media spotlight have contributed to slowing the allie’s advance in Mosul to a hesitant crawl. When anti-ISIS forces reclaimed parts of the city that had been previously under the Islamic State’s control, they discovered holes created between houses and tunnels beneath the streets that allowed personnel and supplies to move without aerial detection. The allied forces also discovered a garage which specialized in outfitting vehicles for suicide bombings, altering them to be bulletproof and avoid surveillance. These factors lead to difficult decisions regarding how much time and how many soldiers’ lives the coalition is willing to give up in order to capture Mosul. The respective cost in delaying progress, however, is larger still. ISIS has become more indiscriminate with its use of force as its defenses have failed. Army Maj. Gen. Joseph Martin reports that civilian collateral casualties per week are, “in the hundreds with evidence showing that’s increasing.”

Without Mosul, ISIS would be without its biggest source of prestige, economic support and coordination center. Control of Mosul is central to the group’s legitimacy as Abu Bakr Baghdadi’s jumping off point. The caliphate’s official title as the “Islamic State of Iraq and the Levant” would lose both its accuracy and its sense of attraction among certain circles due to the group’s inability to control any significant portion of Iraq. This would be a major hit to ISIS’s recruitment abilities, despite being counterbalanced by potential anti-American sentiment following the mass civilian airstrike. Without a means of bringing new recruits into the organization, the group’s influence would likely dwindle and dissipate. The group already lost control of the city’s oil fields earlier in the campaign. ISIS fighters have reportedly stopped receiving payment as the organization has run out of money. The extortion of civilians within Mosul, not uncommon in similar situations, is difficult when there are battles to fight and the city is essentially starved.

Mosul’s strategic position in Northern Iraq once made it invaluable in controlling the group’s territories in Northeastern Iraq and Northwestern Syria. The city’s close proximity to the Syrian border was useful in working in tandem with ISIS’s remaining major city and new de-facto capital in Raqqa, Syria. But what was once an advantage is now a liability, as the city’s position between the northern Kurds and southern Iraqis encouraged the formation of an opposing coalition that was otherwise unlikely. The loss of Mosul will shake the group’s very identity and serve as a huge blow to ISIS’s chances of establishing the globe-encompassing Islamic state that it seeks.

As the tides continue to tip in favor of the Iraqi coalition, the focus of these forces will soon turn towards Raqqa, where another offensive is already underway. There is much speculation over when ISIS may be defeated and what the terrorist group will look like in the aftermath of this defeat, but these estimates carry wild degrees of uncertainty. Halting ISIS’s caliphate goals isn’t likely to end the threat of terrorism that occasionally penetrates the West. If anything, ISIS grows harder to deal with as its extremist foreign fighters disappear back into their native populations and sow fundamentalism back home. The relative clarity of a defined battleground will soon be lost; a reality that the coalition is already preparing for.
The next challenge after Mosul falls will be in identifying the enemy fleeing among the Mosuli refugees. Islamic State members have already begun abandoning Mosul in what appears to be an acknowledgement of defeat. They may resurface elsewhere in attempts to establish control in other parts of the Levant, land the group claims as its religious right. Increased terrorist activity may become a top priority due to a lack of having a solidified sphere of influence or they may simply refocus on resource acquisition as they regroup. What seems to be most certain, however, is that the loss of Mosul will spell the beginning of the end for ISIS’s sovereign state and will bring about the liberation of innocent civilians that have been starving and dying under ISIS’s oppressive rule.