Brazil’s new president, Jair Bolsonaro, made no effort to hide what he would implement as president while on the election trail. His campaign promises included ending the practice of marking off protected indigenous lands, cutting down on the power of environmental agencies, and making it easier to proceed with commercial farming and mining on indigenous reserves. The Brazilian politician has had a contentious record regarding the environment and indigenous populations, which led many people–both in his constituency and around the world–to worry about the fate of the Amazon and the indigenous people in Brazil.

During his campaign for president, Bolsonaro said he would loosen protections on the Amazon that reserved land for indigenous people and nature reserves, as he believes they are an economic barrier. His words worry the indigenous people and their allies because of Bolsonaro’s previous statements, where he has said that their respective territories should be used for business purposes. Aligned with his anti-environmental views, he has pledged to kick out international organizations such as Greenpeace and World Wide Fund for Nature in addition to amending Brazil’s anti-terrorism laws to include social movements. Bolsonaro’s beliefs and policies echo that of the military dictatorship that ruled Brazil from 1964 to 1985, where indigenous people were killed and driven away from their lands in order to make way for business projects.

In 1967, Brazil established FUNAI, the Fundação Nacional do Índio, a department designed to protect the indigenous population. On the first day of his presidency, Bolsonaro took away power from FUNAI, handing it over to the Ministry of Agriculture which is subject to the wishes of agricultural lobbying groups. The ministry will now oversee which lands get protected status and the division of lands of the quilombolas, descendents of slaves in Brazil. Indigenous leaders criticized this move since it affects their land, which makes up for 13% of Brazilian territory. Bolsonaro defended his actions, stating in a tweet that 15% of the national territory is currently marked for the indigenous people and quilombos, where less than five hundred thousand people reside and live in isolation from the real Brazil– adding in that they are being exploited and manipulated by NGOs and encouraging citizens to integrate the groups into central Brazil.

Land grabbers, known as “grileiros,” have been on the rise after Bolsonaro’s election, attacking indigenous communities and largely invigorated by his statements. The grileiros destroy the local environment by cutting down trees or burning undergrowth. Not even two weeks after Bolsonaro’s inauguration, a group of men trespassed and invaded on indigenous land belonging to the Uru-eu-wau-wau tribe. The two groups were at a standoff until the invaders eventually retreated when the tribe nocked their poison-dipped arrows in their bows. Since Bolsonaro was elected president in October, land invasions have risen by 150%.

The Bolsonaro administration wasted no time in getting to work on instituting his ideas. By the end of January, his government had already announced new infrastructure projects that will take place in or around the Amazon. One of the regions, where a dam will be built, is on the Trombetas River where four indigenous reserves are located and where eight quilombos communities live. The Chief of Strategic Affairs—-retired military general Maynard Santa Rosa—- justified the Trombetas dam by saying that the people of the Amazons need to integrate so they can have jobs and an income. Santa Rosa’s announcement is only the latest in a line of projects meant to develop and utilize the Amazon under a general claim of economic benefits for all.

Bolsonaro is a worrisome political figure, whose proposed policies could push the deforestation rate in the Amazon up 268% according toaccording to aa 2017 statistic. The Amazon is the world’s largest rainforest and about 60% of the Amazon is in Brazil. Between 2004 and 2014, Brazil was able to roll back deforestation rates through strict enforcement of laws, using satellite imagery and land protections to monitor forest expanse. However, enforcement decreased in 2016 after the impeachment of then-president Dilma Rousseff when farmers and ranchers started using Amazon land for their own uses.

Bolsonaro’s actions will have detrimental effects on indigenous people and local ecosystems.  The Amazon rainforest helps regulate the Earth’s climate by acting as a major carbon sink and serves as a key component in the fight against global warming. There are large amounts of carbon stored in the forest biomass and the soil in the Amazonian forest. As trees are cut, they release carbon into the atmosphere and fewer trees remain to absorb this carbon. Deforestation allows for water to run into the rivers directly rather than be stored in soil and vegetation, in which the water would be released slowly throughout the year. As a result, the Amazon can be vulnerable to drought. Furthermore, climate scientists believe that part of the battle against anthropogenic climate change is empowering indigenous people, which is hindered by Bolsonaro’s prioritization of economic interests over indigenous rights.

The question arises of what to do next. The international community must put pressure or impose sanctions upon Brazil, and have faith that he will respond to their actions. Activists and the indigenous people of Brazil need support so that they continue their work in preserving the environment and their homeland. What bodes ill for the Amazon bodes ill for all. 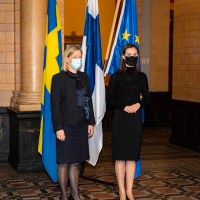 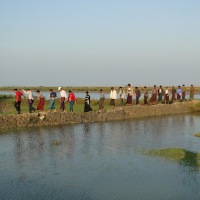